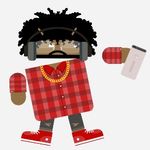 Triller, the AI-powered music video “social streaming”™ platform, announced, “Step Up to the Mic” powered by Boost Mobile™, a nationwide digital elimination-style talent search competition. The contest is open to the public and serves as a platform for anyone to catch their big break and begin their journey with support from Triller, Boost Mobile, and prominent artists Starrah, Murda Beatz, Quavo, and Takeoff. One talented artist will win a record label and management deal, record an original song written by prominent songwriter Starrah and produced by Murda Beatz, shoot a professional music video, and much more. Talent submissions will be accepted May 8–29, 2020, followed by a fan and judge voting. The grand prize winner will be announced on August 3, 2020.

The “Step Up to the Mic” grand prize winner will receive:

Key to the “Step Up to the Mic” competition are singer, songwriter and rapper, Starrah, record producer, DJ, and songwriter, Murda Beatz, and artists Quavo and Takeoff.

Starrah has written 14 singles that have reached the Top 20 on the Billboard Hot 100; two of which went No. 1 (“Havana” by Camila Cabello and “Girls Like You” by Maroon 5) and five peaking in the top 10. Murda Beatz has produced numerous hit singles for top rappers including Travis Scott, Gucci Mane, Drake, Migos, and 6ix9ine, alongside frequent collaborators Cubeatz. Quavo is a rapper, singer, songwriter, and record producer, best known as a member of Migos, and has numerous hits that have made the top 10 of the Billboard Hot 100 with Migos and other collaborations. Takeoff, also a member of Migos, is a rapper, singer, and songwriter with several top 10 singles to his name.

To Enter the “Step Up to the Mic” competition:

Using auto re-boost for my hotspot my account is renewed once/month.  What occurs if I run out of data before month end?  Thank you.

We're sorry to hear that you feel that way @Nittyfra. Please send us a private message with the details of your issue. We'd like to take a closer look.