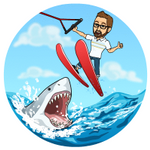 My name is Geoff and as my username implies, I am a geek through and through. Love technology, unabashed Star Wars nerd since the agent of 4 and love playing video games. I just recently joined the Boost Product Ambassador team and I'm super excited to share my geekiness with the world.  I just received the Samsung Galaxy J3 Emerge from Boost and after having used it for a several days now, I wanted to give some of my impressions of this phone.

First off, let's talk about what I discovered while unboxing.

The J3 Emerge doesn’t come with a lot of extra's; you get a battery charger, mini UBS charging cord and a starter guide. For those looking for a set of headphones, you wont find any, but to be honest, I was kind glad to not have another pair that would just end up sitting in a drawer. Kudos to Samsung for going minimalist which in turn keeps the cost down for the consumer. The phone is $59.99 for a limit time right now.

Let's talk about the phones display: the J3 Emerge has a 720p HD TFT display. So what does that all mean? Well, you'll be getting a nice, vibrant screen and you won't be disappointed when viewing your pictures or watching videos.

Samsung sometimes has a reputation for making phones that have a "plastic" feel, but I was surprised to find the opposite here. The phone has an aluminum frame and a nice, decent weight to it. Not too heavy, but not so light that you can't feel it.  While the battery cover on the back of the phone is made out of plastic, Samsung has coated in a sort of non slip material which I really like. The phone feels comfortable in the hand and I never felt like it was going to slip out of my grip while holding it.

You probably listen to music and other audio on your phone a lot. This was one area that I wasn't sure about, but after having spent several days with it now, Samsung has really impressed me with the J3. The sound is deep and rich, whether you're listening with your headphones or the external speaker. While there is only one speaker on the phone, I really like Samsung's decision to place it on the side of the phone instead of the trend of putting it on the back as the audio is less muffled this way.

The phone has a 2600 mAh battery and I've found that I can get through most of my day before needing to charge it. And just like some of Samsung's other phones, the J3 Emerge comes with features to help improve battery life as well so its nice to see that these features are becoming standard.

Although, J3 only comes with Android 6.0 Marshmallow it has the newest version of Samsung's user interface, Touch Wiz Grace UX. I really like the direction Samsung is going with this: the app icons have received a nice update and overall it has a nice, clean look to it.

For several years I've been a little spoiled with high end devices, but I found myself saying I could easily live with this phone. For those that have are a little leery because this phone isn't a Galaxy S series phone, don't be. I found the J3 Emerge to be a pleasant surprise. In the coming days, I'll be posting some in depth blogs on the various features of the device, so stay tuned.

Do you have the J3 Emerge? If so, let me know what you think of it. Questions about capabilities or specs?  I'd love to hear them.

I like the looks of the Samsung J3, right now I have the LG HD Tribute and I really like LG. So is the J3 a better choice?

Great question @yellahar. I'll have something for you in a few days, but in the mean time, you can head on over to the Boost Mobile Shop and compare devices there.

@yellahar check out my head to head comparison on the J3 Emerge vs the LG Tribute HD. I think you'll like it.

I bought the J3 Emerge 2016 phone, and had it 2 weeks when it fell out of my pocket into water. I get it out immediately.

I did dry it out(with dryer and putting it in rice)...it worked, including, the screen didn't go gray, until it discharged and I had to charge it back up again. Now, it works...rings whenever I receive phone calls/messages....except, the screen never came back on...cannot see who is calling nor read texts.

Samsung tried telling me to pay them $73.01 so they can tell me what's wrong and send it back unfixed.

Boost told me to take it back to the store where I bought it....they might exchange.

I still have it.

What is another good phone you recommend?

I have another phone number with Boost...LG Stylo 2....good phone.

I did enjoy the Pro features on the camera.

@lmccarthy6 Sorry to hear that your J3 Emerge isn't working, but to answer your question, i've been using the LG Stylo 3 for a few weeks now and really like it. The camera is good, i really like the responsiveness of the stylus pen and the screen is about the same as the J3 Emerge. I would definitely check that one out!

Just coped the J-3 paid a grip but the upgrade was needed. No longer a prevail holder...

Just got a galaxy j3 emerge and I like the phone except some websites show super tiny text  (even zoomed in all the way) or don't show pictures like homedepot.com very annoying since I need that for work

Hi! Quick question. I just got the J3 coming from Gaxaly S7 Edge, I agree with you don't need it. I plugged my earphones in to make a phone call you can hear it ringing but once they answer you can't hear anything. I can listen to music and videos with no problem. I have never had this problem with any other phone. Any suggestions would be great. Thank you

I still use boost for everything even cutting my bill a precentage. So far having the J3 dealing with an over heated battery only because I like running, more then one app at a time it's like a no smoking zone when it come to starting the day off gotta feed you inner ambition

Friends I wanted I was ready for the galaxy 7 upgrade but was offered cash, only because a cool coworker wanted more then I did.  Never trust [co-workers]  there upgrade stealers!  So long G7 crying Face. Somebody pray for me.