I just ordered the new Celero 5g phone. Has anyone found a case that will work with this phone online anywhere. TIA.

Agreed, hopefully we can get some answers soon, I got a phone I am afraid to use.

@Ghostrider2k have you received your phone yet? If so how do you like it?

I did call Boost Mobile yesterday and they confirmed that they do not have any available for sale on their website but they said it is possible that the physical stores may have some cases for sale. I haven't checked yet as I do not have a brick and mortar store close by and my phone has not shipped yet.

SO far it's okay, not as crisp or clean as my old S8 but it is 5G and is bigger and Android 11 is better. I am going to try a Samsung A32 5G case and screen protector. I will let you know if it works. [has to be the A32 5G with the square opening]

HI, I CHECKED MY LOCAL BOOST MOBILE STORES AND THEY DIDN'T EVEN KNOW ABOUT THE CELERO 5G PHONE, INFACT WHEN I SHOWED THE STORE MANAGER MY ORDER FORM HE TOLD ME IT WASN'T FROM BOOST MOBILE AND PROBABLY A SCAM... THAT'S FUNNY WHEN I GOT THEM DELIVERED BY FEDEX THE NEXT DAY I TOOK IT DOWN TO THE STORE AND SHOWED HIM, HE TOLD ME HE NEVER HEARD OF THIS DEAL!

MAYBE BOOST MOBILE SHOULD LET THEIR STORES KNOW ABOUT THE PHONE DEALS THEY OFFER SO THEY CAN ACTUALLY HELP THEIR CUSTOMERS.....LOL  NO CASES !

Hello Steven! This deal is only online. The stores are independently run,  online deals are different from what is offered in the stores, this is why they are not aware. We can assure you it is not a scam. If you have any other questions please reach back out to us here.

That's weird, because I just got through talking to customer support and they said they were available at Best Buy (False. Nothing close on their website) or in-person at Boost Mobile stores (which you have proven false and would do me no good since I'm in lockdown)

Over on FB Customer Service is claiming it was a free phone. Was anyone here's phone free?? Bueller, Bueller, anyone?? Didn't think so.

Not only that, they say they never manufactured the cases. What kind of a company forces customers to buy a new (not free) phone with no case or insurance available??!$? WHO does that?? 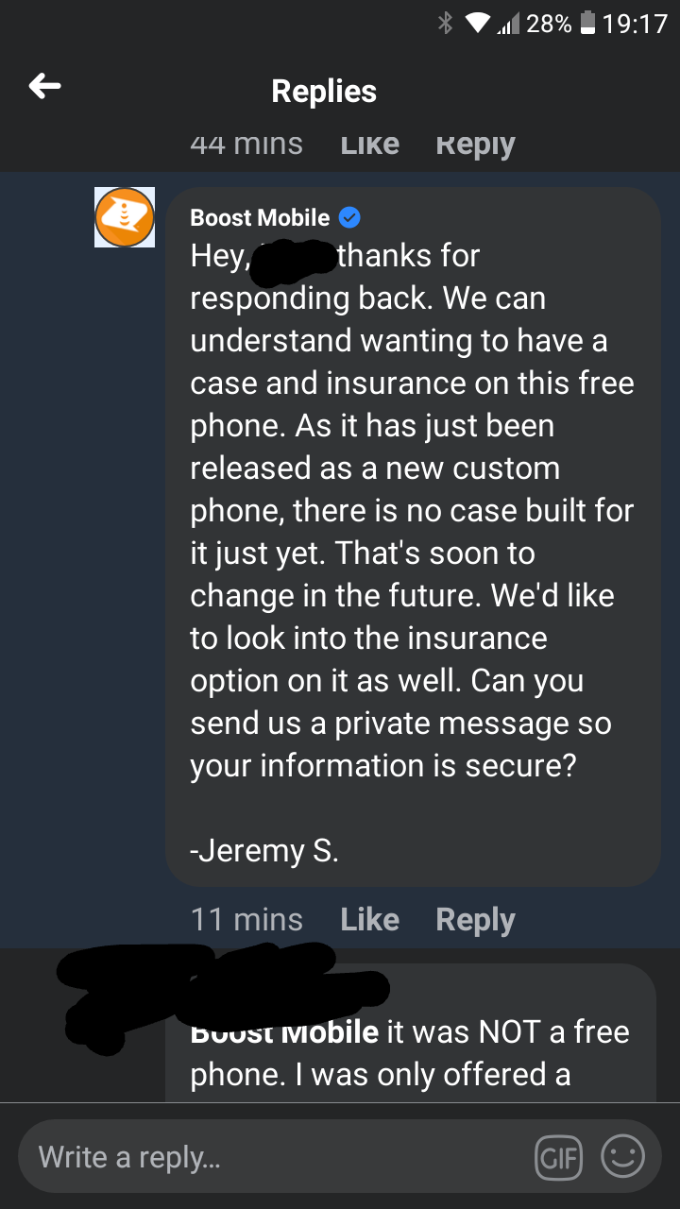 Its a WingTech phone [just released here] it's Chinese. I will know by end of day if I have a case and screen protector that can work for it. As for local dealers they are all franchises that according to rumor will NOT be part of the new network, it is no wonder they don't know.

I've gotten my phone and new SIM [5g expanded for several netowrks] and it works okay, but they are phasing out older phones that used 4G/3G none LTE networks. This is why the sudden rush to 5G, the older networks are over loaded and being switched to other uses, whereas 5G has such a larger bandwidth.

Thanks @Ghostrider2k hopefully you will find something that will work with this phone that won't cover up the finger print or the cameras.

The A32 Samsung my wife has is almost identical. They make 2 cases for it, one that hugs the camera lenses and one that has a rectangle opening in the back. I will know once FedEx gets here today. Once I know for sure I will post images and , etc.

@Ghostrider2kh have you found a case for it?

Also, where is the user manual for this phone? Did anyone get one with their phone? I didn't, just a starter guide. Wasn't aware it was made in China, either.

@dblcork I didn't receive one either.

No manual, I didn't get anything but the cable and a power block , a sim card tool and the phone.

Hello George! Cell phone manufacturers don't provide a paper manual for their phones. You can find online support and manuals on their website. Depending on the phone you have, you can find them here: https://www.boostmobile.com/support/phone-help

@Ojay76 unfortunately this is of no help. There is no Celero section on the Boost website.

We have hidden your post because it violates our Community Rules and Guidelines. Our members make the Community. If you’d like to continue participation, please create a new post that follows Community rules.

Btw anyone kno how to screenshot using the celero 5g

One more question how i turn my lite on to blink when my ring r when i receive texts? My hearing not what it use to be so don't always hear phone ring

@dbbush sorry! I have no idea! I'm in a similar situation with my joint issues and trying to figure out how to answer call with a long-press instead of swiping... Hopefully, they give us a PDF manual soon

@dbbush I've been trying to figure that one out myself. But, there does not seem to be a light on the front of the phone like my pervious phone, just a camera.

So if anyone didn't know I tried unsuccessfully to find a case for this phone and gave up. A lot of my comments were marked private and unseen by anyone becasue Boost apparently doesn't want me to share info with you guys.
I have given up the chase and went ahead and bought the A32 for a holdover until I find something better or leave Boost when Dish network takes over, and you know how well they do business...
I wish you all good luck and if anyone didn't get the 'cheap' deal and wants one of these, contact me here, I will sell it for what I think is reasonable for a 'used' phone that I know works, just I have to have a phone case now, not weeks from now.
Thanks all.

Hello George! We dont want you to feel like we are blocking you. We are only marking the posts that violate our Community guidelines. For instance, content that has live links or content that is overly negative, hostile, or does not add to the conversation. The people in this Community are here to help or they need help. We understand you may be frustrated when you cannot find an answer to your question, but that is why we've created this community, to help you find answers.

@Ojay76 people use screen names for a reason, anonymity. So, please stop using people's real names, it's unprofessional. I'm sure you will block this comment. And, by the way, NO ONE is being negative. Boost created this problem and we are trying to help each other out, you know, because Boost isn't helping.

yeah boost isnt helping ! where is the case? who puts a phone out with out a case??? BOOST does ! but at the same time I was reading how boost was selling for phone for close to $300 WITH a case but now that its offered for about $50.00 there is no case anywhere on the planet to be found. how odd?!

@Mareka exactly. Boost Customer Service has been no help at all. The only help we are getting is from each other

@stevengshaffer I think the press release is wrong. I tried adding the $279 phone to my cart to see if it would link to the case, but the only difference between the $49 phone + free sim card I bought and the $279 cart was $150 pre-pay credit. No sign of a case anywhere. Unless the case is already on those phones rather than a separate item

I just ordered a case with the search line "B-Tact case for wingtech celero 5g" from Walmart online that says it works.  I won't get it till the 20th but it says it is made specifically for this phone.  I haven't figured out the screen protector yet.

@rcharrel do use have an item number or the listed name for it? I did the search, as suggested, and I'm only seeing cases for Samsung phones.

@stevengshaffer thank you so much. I just ordered it, says it will arrive by Oct. 19. Again, thank you.

@stevengshaffer thank you I just ordered my case from Walmart it says there are only five left. I do have to say Boost Mobile really stepped up to correct an issue that was caused by Fedex. In the Fedex distribution facility in Ocala, Florida the label for my phone ended up on another package which already had another label on it. So I received a starter for a tractor instead of my phone. My husband had to call and they said okay we will look into it and this was over two days ago and we have yet to hear back from them.

I also called Boost Mobile to explain to them what had happened and asked if they could put in a claim with Fedex. The next day someone from Boost Mobile called me back and said that they were going to refund the purchase. Once I see the refund on my card I plan on reordering the phone. Thanks for the great customer service Boost Mobile.

Thank you, I will get mine by Oct. 9. There were only 5 left when I ordered. BTW, ordering on the Walmart site was awful. Had to call them to finalize the order. I'll believe it when I see it. Good Luck!!

Not only there is no case for this phone. Boost's representatives don't even know that this phone exists. We received 2 of them yesterday and there is NO manual, NO support, NO data transfer app, NO Maker disclosed, and NO knowledge by four different departments at Boost about the existence of this device.

Thank you, but is out of stock right now.

We have hidden your post because it violates our Community Rules and Guidelines. Our members make the Community. If you’d like to continue participation, please create a new post that follows Community rules.

I was just wondering if anyone has tried Android Auto on the Celero and what your thoughts are?

@kmagno what is Android Auto?

@SunShadow it allows you to display your apps on your phone on your dash and you can use voice commands. I just purchased an Acura that has it and it is great I can use a lot of voice commands to do things on my phone and/or the apps appear on the dash so easier to use. How do you like the Celero 5G. Spent an hour on the phone and chat yesterday with Boost Mobile support as my original phone was lost in shipment and they refunded me but when I go online to repurchase the phone the promo code ($30 discount) I used is no longer valid. So wondering if I should just look for another phone.

@kmagno I actually really like the Celero 5G.  Much faster than my LG Stylo 6 was.  Better camera, too.

If your phone was lost in shipment, can't they give you a new promo code?

@SunShadow the Celero sounds great and I have a much older Stylo than yours. I know crazy that they can't just give me a new promo code. It has been escalated to a subject matter expert so I have to jump back on chat with them on Tuesday afternoon to see if they can get me a new code. Fingers crossed.